So if you’re a regular of this channel you know I’m a Japanese Gel Only kind of gal… but lately I’ve been getting asked a lot about Korean Gel, and for good reason, it has a lot of the cute and sweet attributes of Japanese gel.

So in today’s video I’ll be sharing with you a couple of key differences among the two gels.

Now if this is your first time hearing about Japanese gel… uhm.. Ok.

Let me give you a quick crash course.

All Japanese gel is… is high quality soak-off, true gel from Japan.

And I think what began bringing an enormous amount of attention to it was the extremely kawaii, cutesy fun 3D nail art done with just gel…

Lots of Hello Kitty kind of art… but, since then the JG industry has shifted from that type of nail art (not that there’s anything wrong with a good old classic 3D Hello Kitty set, right??).

But now, Japanese gel has matured into the most perfect gel nail product to create classic and timeless looks from a classy shade of red to a super quaint tortoise print nail art design.

And the beautiful thing about Japanese gel, and why I am such a big advocate (yeah, like just a little, you know, ha!) is because as an American trained nail tech that was taught that in order to be successful I had to offer it all… (you know acrylics, hard gels, gel polish, reg polish, etc…) when I came across Japanese gel I was so pleasantly surprised to find out that I could do it all, not by carrying it all… but by simply mastering one nail system — soft gel via Japanese Gel.

Yup, with Japanese gel I could create short-length gel manicure, natural nail overlays, and even extensions of the natural nail. Yes just with one nail  system, not 5!

So either way, that is my backstory to JG, if you would like to learn more about my personal journey with it.

Ok, back to today’s topic.

So as of maybe a year ago now I’ve started seeing Korean brands start making an entry to the industry. I first saw the Estemio brand carried by a popular re-seller here in the states, and now also the distributor of Leafgel here in the states is carrying a Korean brand called “From the nail” or “F Gel” for short.

And as I did a tiny bit of research on both distributors sites, I learned 4 characteristics of Korean Gel.

#1 Again the packaging just like Japanese Gel is super cute. Very eye-catching, and w/o noticing much else, you’re like “I need it”.

#2 It seems like the colors from a Korean gel line are actually all offered in brush-on bottle form and are strongly pigmented, just like a lot of Japanese Gels can be. And so contrary to Japanese gel, the colors are not offered in potted form, while some Japanese gel nail brands like Vetro and Presto don’t mind carrying both bottled or potted color gels. So again, Korean gel currently seems to be the most pigmented gel in a bottle, and I think that is their whole value proposition.

And #3 it seems that although a potted gel system is not the main concept of a Korean gel line, they do not oppose potted gel all-together and can actually offer their clear formulas in pot vs bottle. At least that is true with the Korean Line, Estemio. FGel does only bottle.

#4 Korean gel lines also claim to be responsibly made with quality ingredients and so-called “non-toxic” ingredients, and I say “non-toxic” because that term can really mean anything in the beauty industry as “non-toxic” is actually not an FDA regulated term. Most of the time non-toxic means that a few known carcinogens are eliminated from the ingredients used to create the product. It can also mean that it does not cause adverse effects if you inhale vapors, but again up to interpretation.

You best believe that… If you ingest a product only meant for topical use, you will most likely experience a toxic effect 2 minutes later as you become violently ill.

If you want my professional opinion.

I judge gel nail products based on the monomer, and the concentrations… within the gel.

Monomers are used for adhesion and dilution purposes in the gel.

And the reason why I make this emphasis on what monomer and what amount of it is in a gel, is because I believe monomer concentrations to be where most of the allergic reactions can come about from gel nail products.

2 popular monomers you should know about are HEMA and Ethyl Acetate, and I’ve talked about this topic in previous video so do make sure to make time to watch it.

As someone who is mildly allergic to monomers, I typically don’t have a problem with anything containing HEMA,  but ethyl acetate I do, which is why I avoid nail primers like the plague.

And you should know that typically both Japanese Gels and Korean Gels don’t need a separate dehydrator or primer prior to application of your first coat of gel.

Which is a super added bonus of Korean and Japanese gels.

Now, in regard to nail art styles. Overall my biggest impression of Korean vs Japanese gel nail art is that Korean art is more pop. A lot more charms and studs to nails, the 3D action is still very present, and it may definitely mature, like Japanese Gel, into a style for all to make their own.

While on the other hand Japanese gel nail stylists, generally speaking, of course, are more into color blending and mixing colors and smaller daintier embellishments. They don’t always need super pigmented color gels as they tend to use a very light touch to create soft abstract, and “nuance type” nail art.

Now if you’re wondering if you can mix these gels, like over each other,

Overall, I have read that Korean gels and Japanese gels “play well together”,

and as both being quality soak-off gel systems, I don’t see why not… so play away!

One last thing about odor…  judging from the Korean gel I own, it is very low-odor just like Japanese gel is.

So in a nutshell,  I think that the strongest value proposition of Korean Gel, is that of being the strongest pigmented and high quality gel within a bottle.

That’s it for today! Have a happy day, and a productive week! 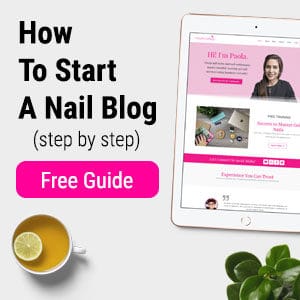